Shinsekai (新世界) pictured above. Despite it’s energetic feel, the area is famed for being one of Japan’s most dangerous districts as a result of minimal redevelopment after World War II.

Late Thursday night (Friday morning in Japan), I received confirmation from the YMCA Japanese Langauge School in Osaka Japan that Osaka’s immigration bureau has cleared me from immigration to Japan. I’ve been approved to seek my two-year student visa to study in Japan, which means it’s time to pack.

More accurately, it’s time to finish packing; we’ve been preparing for months, and we already have eight or nine large boxes of things packed away to ship with Kuro Neko to Osaka.

The long waiting period has come to an end, and we’re finally feeling the real pressure to get to work and work quickly. We can’t wait to see what God has in store for us there.

If it Don’t Fit in a Cardboard Box…

I don’t have much to offer you in this post, except this:

Come visit us, and come take our stuff. We’re eager to connect with people in West Michigan as much as we can before we leave in less than four weeks, and we’re selling or giving away anything that doesn’t fit in a cardboard box, so come make a claim!

No one visits and leaves our apartment empty handed.

Anime fans may recognize the name of the notorious Osaka district from the prominent show “One Piece,” which my good friend Herb introduced me to a few years back. The video reflects our feelings on moving to Japan. 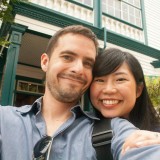 2 replies on “Pack Your Bags!”

Beginning to feel depressed that you guys are leaving… this just got real!